That Song Was Dinner 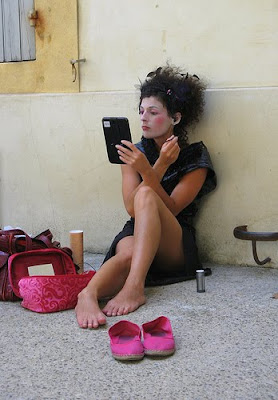 photo by D. [SansPretentionAucune] on flicker

I wasn't going to post today. I'm signing off The Literary Lab for a few weeks until January due to some personal stuff, but last week I said I'd do this post, so here it goes.

I brought up the issue of honesty in writing in my "They've Adapted" post. Honesty is a touchy subject. There were some great comments and ideas that got me thinking what makes writing honest, and how I can identify it in my own writing and others.

Do you ever feel like you're looking in the mirror and you can't even see yourself? I've done that a few times. It's as if you're dressed up for a show, decked out from head to foot, your makeup caked on, your lips bright red, your eyes popping like a peacock's plumage. In fact, you might even feel like a peacock. It might feel splendid. It might feel ridiculous. It depends on you.

I think our stories are mirrors. I've always felt this way. After I read something I've written it's as if I am looking into a mirror at myself. Sometimes it's a fun-house mirror all warped and frightening. Sometimes it's a lake with ripples. Sometimes it's a perfectly oval piece of glass showing me exactly what I am - and that's the scariest mirror of all.

Now I'll move on to music.

One of my favorite movies is Music & Lyrics with Hugh Grant and Drew Barrymore. I know it's a chick flick, but the show is brilliant on many levels (and you'll see this if you grew up in the 80's), but one of the things I love most about it is how much it gets to the root of what remains honest in our work, our writing, and what we choose to share with others.

One of my favorite quotes from the movie is this conversation:

Alex: It doesn't have to be perfect. Just spit it out. They're just lyrics.

Alex: Lyrics are important. They're just not as important as melody.

Sophie: I really don't think you get it.

Sophie: A melody is like seeing someone for the first time. The physical attraction. Sex.

Alex: I so get that.

Sophie: But then, as you get to know the person, that's the lyrics. Their story. Who they are underneath. It's the combination of the two that makes it magic. 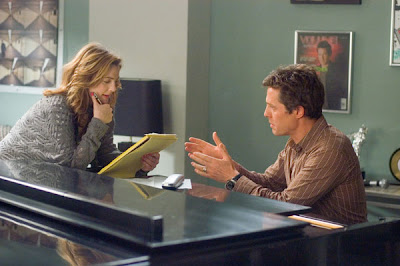 Magic. That's what seems to happen when I manage to get honesty into my writing. It's like a memorable, catchy song where everything comes together and it makes me feel a mixture of emotions that reach more deeply than I thought was possible. I look into the mirror and I see me, but I don't see me. It has become a creation that took on a life of its own. My honesty gave it that life.

Throughout Music & Lyrics Sophie fights for honesty in her work. Several of the characters seem to be taking it away from her - vying to please the audience instead. Alex, the other main character, learns a valuable lesson in teaching himself how to say what he really wants to say. In the end, he writes a song that Sophie calls "Dinner" - her version of what rings honest and true.

Now I'll bring up your comments.

But you are so right -writing is a performance, but it has to be our own. The only sort of writer that I know how to be is myself. And I've finally reached the point where I'm o.k. with that - published or not.

That's a key point, I think - being okay with ourselves. It's a tough place to get to. It can be an uncomfortable journey - one that I'm still taking, actually.

Angel Zapata had an interesting thought:

Don't ever write from the heart. The heart will mislead you, have you question the emotions. Write from the ear. Listen to what your characters have to say and put it to paper. Don't put words in their mouths either or try to jazz up their speech. Write it how you hear it, not how you'd like to see it. Honestly, that's how I write.

This is true. I recently received some critiques from a good friend of mine on a chapter of my book, Monarch. She was shocked at a character's choices, feelings, and reactions to another character's confession. And after she pointed it out I was shocked too! I realized that for the entire year I've been writing this book I've been ignoring my character's pleas to be heard. Sucks for my poor character, Lilian, and for me. I'm going to start listening now.

Letting our characters speak for themselves is honesty, but I also feel that, like a song, there's another aspect that makes it magic - YOU.

Nobody can tell a story like you do. Nobody.

If you try and take things from other writings you've read and studied (and most of us do this subconsciously), if you try to be clever, to impress, to be anything other than what you are, most of your readers will sense it. Davin says:

I think that some stories can succeed without relying on honesty. Many books are written as an escape. But, I think readers can tell when something is written honestly.

It's true. I've set aside books many times because they didn't feel honest to me. I didn't think of it that way: "I can't read this. The writer isn't being honest with me, his writing, or his characters. I will put this away now." No. It usually just doesn't capture my interest and I can't read any further. However, I do think Davin has a point about some stories succeeding without relying on honesty. They can. I've read many of them, and it works. I love to listen to some songs that aren't necessarily teeming with emotional honesty. They're entertaining. Something about them pulls me in.

But I must argue that it is the honest movies, honest songs, honest writing that separate themselves from everything else. As I judge entries for our Genre Wars contest it seems like I'm drawn to the stories that feel the most honest.

In the end, there's two aspects of writing that I find the most difficult, the most important to creating that MAGIC. First there's this, as Scott kindly explained in his comments:

The most honest I am is when I'm most invisible in the writing, when I'm not editorializing but simply presenting my characters as truthfully and as sincerely as I can.

Like the lyrics, I'd say - letting our characters speak for themselves (this is sooo much easier said than done). That's the first kind of honesty I can sense in writing. The other is the actual writing, the melody - what carries the lyrics. How is the story presented? Does it feel like the author is uncomfortable with presentation, with using flashbacks, dumping back story, using elaborate descriptions? Or does all that work seamlessly with everything else? If so, that's when it feels honest to me - when the writer is so comfortable with himself and the story he needs to tell that all that's left is . . . the story.

When I write something like that I look into the mirror and see me, but transformed. I think that's what the slippery term "voice" might be. The writer is recognizable, but they've created something honestly outside of themselves.

This has turned into a very long post. Hmmm. Many thoughts to share. I think I'll go eat some dinner now. Start cooking! I'll see you all in a few weeks.