Your Character is Wrong

Andrew Rosenberg is an aspiring author hailing from the Sasquatch-infested woods of the Great Northwest. He is currently working on his latest WIP, a Steampunk novel known as Steam Palace, in which his main character uncovers her family's deep dark secret and realizes she has been terribly wrong about her life and her ideals.
We'd like to thank Andrew for this guest post today. It's worth reading! You can visit him at his blog, The Write Runner.

Let me paint a picture. We’ll discuss it, then I’ll show you how your character is wrong.

You wake up in the morning. What do you do? Brush your teeth? Take a shower? Make breakfast?

Why not brush your dog? Take a nap? Make dinner?

Sounds silly at first, but what happens is that you make choices. You decide what is important to you at every moment, weigh the alternatives, and make a choice. At every moment of life, we have an infinite number of choices. We think we know what the consequences are of each choice. If we brush our teeth, then we have clean breath and an unkempt dog. But if we brush the dog, then we have a nice puppy but bad breath. Choices.

Some choices are not so obvious, especially when emotions are involved. These are the decisions that people spend a lot of energy thinking about. Whom do we ask out and how? When do we break up or quit our job? Which college is the right one? Should I enlist? People agonize over these choices because the consequences of a bad choice can be painful if not outright deadly.

I read a snippet of someone’s WIP the other day. It included a line something to the effect of “She hated the way he made her feel.”

Here’s the thing. There are no wires attached to your brain and no strings attached to your arms and legs. Nobody is controlling your emotions through some external means. You have eyes, ears, a nose, a tongue, and skin. All these organs generate electro-chemical impulses that are fairly indistinguishable from each other. These signals enter your brain which then decides what those impulses mean. A bunch of neurons fire in your ear, which activates your brain, which interprets those impulses into words, which (according to your X years of life on Earth) you decide means someone is saying something, and that something is hurtful. You’ve wired your own brain to decide what something means. No one can make you feel anything. You’ve chosen the meaning based on your experience and your beliefs about that person and the words that are said.

Here’s the next thing. You decide how your brain is wired (mostly). Your brain is not a computer with X number of transistors. You decide how to decode external stimuli. You make choices based on these stimuli. At some point, you may suddenly make a new choice, given the same external input. How does this happen? You choose to interpret things differently. The process in which you choose new interpretations is called learning. It’s the process in which people change and grow. Inside your brain, the neurons are always changing, creating new connections and severing old ones. You decide which connections are important, and which ones you choose to drop.

This is the key to successful story writing. Your character starts out with a certain world view. They make the same choices given the same external stimuli. This view does not serve them, given an unbiased external analysis, and especially as the story moves forward and they face greater and greater obstacles. Characters are locked into their world view because it’s all they’ve known, and they’ve rejected anything outside this view. They fight to protect this world view, because what does the alternative mean? What would it mean to find out that their belief system is incomplete or flawed? What would they discover if those same hurtful words they hear became helpful or even a revelation? 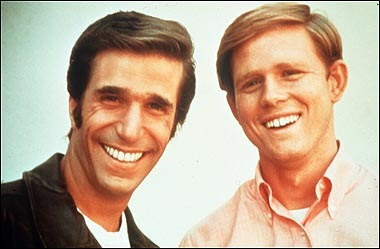 It would mean that they were wrong. Nobody wants to admit they are wrong, or ignorant, or mistaken. More than that, they would have to see that they were wrong about their interpretation of the most important event of their lives, whether this event happens in the backstory or in the first act. Their conclusions were wrong, and every choice they made based on this conclusion was probably based on faulty logic. The best episode on the TV series “Happy Days” is when The Fonz(Henry Winkler) has to apologize to Richie Cunningham(Ron Howard). He’s established his entire world view on being “cool”, or being tough and unrepentant. He must learn that even the great Arthur Fonzarelli makes mistakes. He finally explains, “Cool is knowing the difference between right and wrong and doing what is right with guts.” He has a new interpretation of the word “cool”. He was wrong, and once he realizes this, his whole life changes and he now has the power to conquer his foes.

A good story should rip apart the character’s world view. But characters shouldn’t go down without a fight. The biggest and most important battle a character fights is not with the antagonist. The villain is simply there to point out the character’s weaknesses, to show them where they’ve been wrong. In fact, there’s no way to defeat the villain while clinging to their old world view. The villain uses this knowledge to their advantage. It’s not until the character learns a new interpretation of their defining event and beliefs that they can defeat the villain, and the old demons in their head. It’s the moment where they say, “I’m not this weak/boring/unlovable/unworthy/untalented/indecisive/fearful person. I’m a mighty/fascinating/cherished/deserving/inspired/assertive/brave man/woman and I’m kicking ass!”

So here are the questions you should ask yourself when reviewing your story:

1. What critical event occurred in your character’s life (usually in childhood) and what decision did they make about themselves based on that event?

2. How does it affect their world view?How does this negatively impact them in the present (the start of the novel)? How does it hold them back?

3. How does this world view impact their ability to work through the central crisis of the novel?

4. What do they learn about this critical event in their past? What new interpretation do they have? How does this affect their choices moving forward?

5. How does this help them confront the antagonist and prevail in the end?