Friday Filler! With A Contest!

The contest, alas, is not for you, but for us! Read on. But first, this: 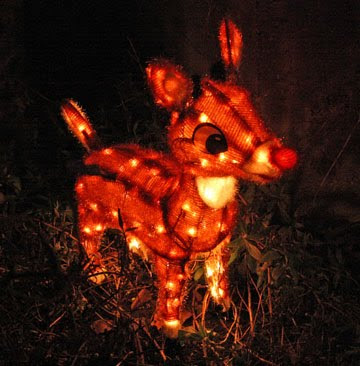 Yes, that's Rudolph, standing in my front yard. I Hope Santa doesn't try to repress him again this year, just because his nose glows. Anyway, 'tis Friday and I have some announcements:

Notes From Underground: If you are one of our handsome/lovely contributors, don't forget to send us your submissions by next Wednesday, December 15th! It would be a shame if your stuff didn't get into the anthology. Just saying, in a passive-aggressive threatening manner.

Trivia Contest & Giveaway! The first annual really cool Literary Lab Trivia Contest With Prizes (we'll find a shorter, punchier name soon, I promise) is coming to town! Stop by every hour on Tuesday, December 21st for questions and prizes! I don't know what the questions will be, nor do I know what the prizes will be, but we'll sort that out by the 21st and it will all be amazing.

The Great Mighty Reader Challenge: This is the contest of which I spoke! Domey Malasarn, Michelle Davidson Argyle and I have accepted a challenge from Mighty Reader to each write a story based on an idea/image she has supplied. This came about during Davin's recent visit to the very nice home I share with Mighty Reader. Davin and I were discussing how different our basic methods of creating a story are: he has an initial idea for the beginning and writes away from it while I have an initial idea for an ending and write towards it. Mighty Reader suggested that we each take the same idea and Davin would use it as a starting point and I would use it as an ending point. So we're going to do that. Michelle is going to use the prompt as either a start or end, as she likes. We each have One Week (next week, as it happens) to write our brilliant stories. We'll post them, or links to them maybe, here next Friday. Stay tuned. It will be awfully fun.

Also! It's Friday, and none too soon! This week has made me very tired. Tomorrow we go forth and ritually slaughter an innocent tree, which we'll drag home and cover with lights and tinsel and stuff. There will also be a hot lunch and hopefully cocoa.
Posted by scott g.f.bailey at 9:03 AM