Do You Have to Sum Up Your Book in One Sentence?

Not long ago I believed that if you couldn't sum up your novel in one sentence, you were doomed. If you couldn't do that, you didn't know at all what your book was really about. In several ways, I still believe it, but as I write more and more I've discovered that part of that belief is complete nonsense.

Why a sentence is good
First of all, it's kind of nice to be able to talk about your book in one sentence. You know, when people find out you're a writer and they ask you what one of your novels is about, it's nice to feel confident in that one sentence. I used to hate it when I stumbled and fumbled with my words, trying to think of how I could sum up that huge story into a little tiny description. Now, if someone asks me what Monarch is about I tell them it's about a CIA spy who who has to track down a big-time terrorist, but also save his own heart in the process. The problem? There's so much more to the book than that. There's even more to the book than the back-of-the-book blurb. Lots more. The blurb on the back doesn't even mention the other two huge story lines and points-of-view. 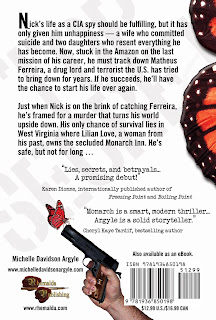 Oh, well, though. That's marketing for you! It's also unrealistic to think everyone wants to sit down and talk about all the intricacies of your book with you. What they really want to know is the basic plot and idea, and honestly, if you don't know that about your own book, you might have some problems.
For instance, when I first wrote Monarch, I honestly had no clue what the book was really about. It's about a spy, I told myself. A spy who isn't like other spies. I wanted to take the James Bond character ideal and turn it on its head a little bit. I did, but even after two drafts the focus in my story wasn't clear. So, after realizing this, I finally took the time to figure out where I wanted to focus, and I rewrote the book with that focus in mind. Tada! The book worked. It wasn't quite as easy as I make it sound, but that was the core of it.
Why a sentence is bad
Just like you as a person can't be summed up in one sentence, neither can your novel. There are so many layers, so many characters and intricacies and ideas that boiling it down to one sentence is almost absurd. I've often thought the idea of my books sound absolutely boring when boiled down like that. For instance, Cinders is the story about what happens to Cinderella when she decides her prince isn't who she wants after they get married. Hmmm, interesting concept, but wow, that's missing a lot. My novella Thirds is about a girl who wants the same magic as her two evil stepsisters. That sounds overdone, if you ask me.
What I've concluded is that summing up your book into a sentence can help you in a lot of ways, but I don't think it's absolutely necessary. I also don't think your book is totally lost if you can't sum it up. Some stories are much more complicated than others, and all writers function completely different from one another. I know I've asked my friend, J.S. Chancellor, what her books are about in one sentence, and she told me I was nuts if I wanted her to do that.
Will learning how to sum up your work in one sentence help you with a query? Probably, yes, but as I've discovered, a query isn't the embodiment of your novel. It doesn't even begin to explain your book to its full capacity. It's more like dangling a worm on the end of a hook, like the back-of-the-book blurb of my novel, Monarch. My publisher and I decided what to focus on, and we ran with it. That book could be marketed probably 80 different ways. The blurb that's there now is the worm we decided to dangle.
Posted by Michelle D. Argyle at 8:03 AM